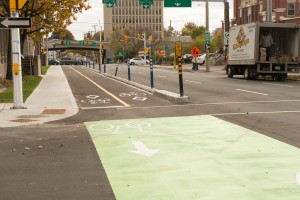 To increase awareness and help ensure users know how to use the O’Connor Bikeway safely, employees who commute on O’Connor Street are asked to review the safety tips below.

Background
The O’Connor Street Bikeway consists of a combination of protected two-way bike lanes, painted bike lanes and shared-use lanes connecting the Laurier Avenue Bikeway with Fifth Avenue, near Lansdowne Park. It is part of the Cross-Town Bikeway Network, a system of seven bicycle routes designed to provide a safer, continuous path for cyclists across the city.

O’Connor Street now has two-directional bike lanes on the east side of the road from Laurier to Isabella. This means it is now one-way for drivers and two-ways for cyclists.

Cyclists and motorists are asked be respectful and courteous to each other.
Reminder to drivers:
• Be aware of cyclists coming from both directions, especially at intersections
• Before turning, look in both directions and make eye contact with cyclists
• You cannot turn left off of O’Connor on a red light
• You must yield to cyclists and pedestrians when turning left

Watch a video on how to cross the protected bike lanes as a driver.

Reminder to cyclists:
• Be aware of cars and trucks, particularly when they are turning and where green road markings indicate crossings
• Be aware of pedestrians
• When turning, look in both directions and make eye contact with drivers
• Use bike boxes to make turns
• Southbound left turns can be made by yielding to oncoming cyclists
• Do not ride across vehicle traffic to turn right

For more information on the O’Connor Street Bikeway, visit ottawa.ca.