River Ward or Ward 16 (French: Quartier Rivière) is a municipal ward located in Ottawa, Ontario, Canada. It is located in the centre of the city and covers both sides of the Rideau River from Carling Avenue in the north to the Ottawa International Airport in the South. The ward includes the communities of Carlington, Central Park, Carleton Heights, Riverside Park (including Mooney’s Bay), Hunt Club/Uplands and Ridgemont/Ellwood.

The ward is home to the Central Experimental Farm, a National Historic Site, and the Canada Agriculture and Food Museum. It will also be home to the new Civic Campus of The Ottawa Hospital on former the Sir John Carling site, bordered by Carling Ave. and Queen Elizabeth Drive. 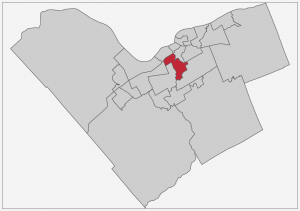 River Ward is served by seven different community associations. They are listed below with links to their respective websites.

River Ward was once home to such celebrities as Alanis Morrisette and Paul Anka, Comedian Mike MacDonald, and Olympians Sue Holloway and Greg Joy.