Ottawa – On Sunday, June 28, new OC Transpo summer schedules begin, along with route improvements and adjustments to routes travelling along a section of the Transitway, which will close between Blair and Hurdman Stations for construction of the O-Train Confederation Line. 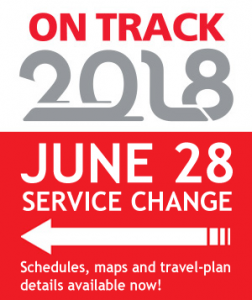 When the Transitway road section closes June 28, bus routes will be adjusted between Blair and Campus Stations. Cyrville Station will be closed, and some routes will no longer stop at Lees, Hurdman, Train or St‑Laurent Stations. These adjustments will evolve as more sections of the Transitway are closed over the next three years, until the O-Train Confederation Line opens in 2018.

Most bus routes that use this section of the Transitway will travel on Highway 417 and Road 174 to benefit from new bus-only lanes and other improvements, and to provide the quickest trip to and from downtown. Travel time will, however, increase on certain trips, and some riders will need to make an additional transfer.

The following mitigation efforts have been set in place:

Construction of new light-rail stations at Blair, Cyrville, St-Laurent and Train will affect customers as follows:

Further details, schedules and maps are available at ontrack2018.ca.

The next service change will occur on September 6.