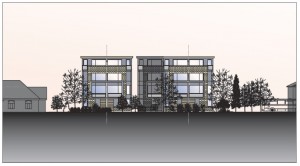 My office has received a revised zoning amendment proposal for 1110 Fisher Avenue. The site is located on the west side of Fisher Avenue south of Trent Street and north of Baseline Road.

The current proposal is a Planned Unit Development consisting of nine total units including two semi-detached dwellings proposed for the front of the property and one semi-detached and one townhome dwelling proposed for the rear of the property. The buildings are separated into four blocks, two in the front, two in the rear, with a driveway and parking access located in the centre.

The proposed vehicular entrance to the site is situated roughly in the center of the frontage on Fisher Avenue. Two parking spaces will be provided for each unit with one in the garage and one in the driveway. The private way access is a two-lane, two-way access.

As residents may recall, in January 2013, an application for rezoning was submitted to the City of Ottawa for 1110 Fisher Avenue proposing an amendment to permit a 42-unit, 6-storey condominium building. Concerns raised by local residents and the former ward Councillor resulted in the proposal and the application being put on hold. The developer and City planners have worked on a much more reasonable proposal for development on the site.

My office will be hosting a public meeting on Thursday, February 19th at 6:30pm at the Alexander Community Centre, 960 Silver Street. For more information on this development application, please visit the City’s website at: http://app01.ottawa.ca/postingplans/appDetails.jsf?lang=en&appId=__9ILW9X 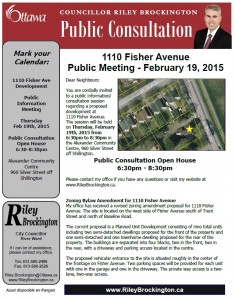 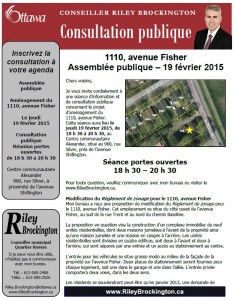 Click the links below for more information on this project: 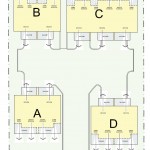